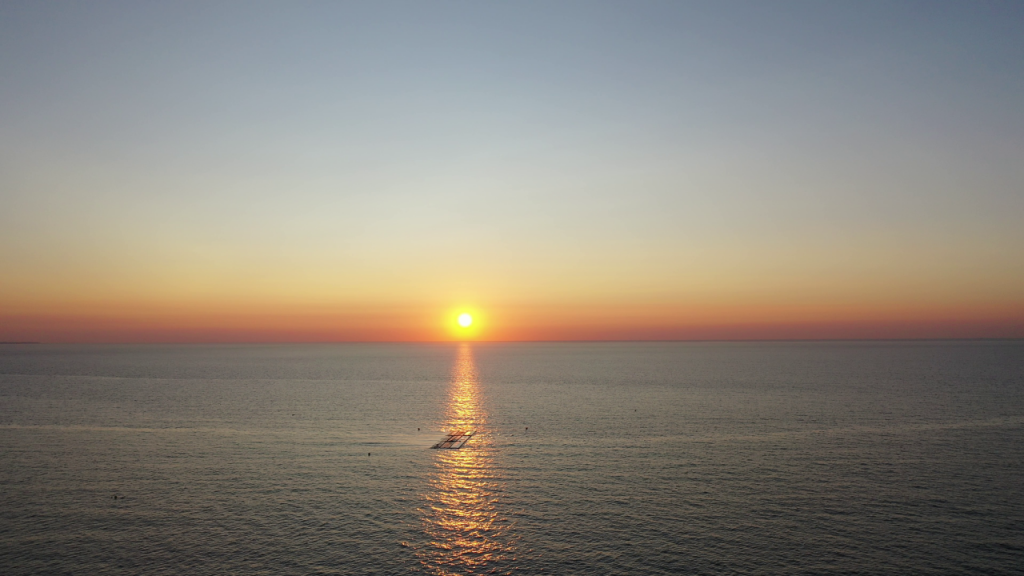 Scheveningen, The Netherlands; 15 July 2021 – Today Oceans of Energy announces that its offshore solar system survived all storms in the past 18 months including storms Ciara, Dennis, Bella and Evert. This is an enormous milestone for the company and the energy sector, as it shows that the system is ready for the realization of combined offshore solar and wind projects creating 100 to 5.000 MW of offshore solar energy per project.

By using only 5% of the Dutch North Sea half of the total energy demand – six times todays electricity demand – of the Netherlands can be generated. This can be accomplished by using the space in-between offshore wind turbines, avoiding use of scarce land. This is an enormous benefit especially in the light of today’s issues with solar panels on land.

“When I first had the idea of offshore floating solar systems, to save land space, some hurdles came to mind. The largest one being the enormous challenge of keeping any system alive at full sea. The North Sea is one of the roughest seas in the world. Thirteen meter high waves occur at times. So it is with immense pride that we announce that our system has survived these conditions for one and a half years. Nothing stands in the way now of megawatt scale of offshore solar farms all over the world,” Allard van Hoeken, Founder and CEO of Oceans of Energy says.

All units in the roughest waves
In December 2019 the first offshore solar farm system in the world was deployed off the Dutch coast. One year later an additional offshore array was set up further off the coast at the North Sea Farmers Test Site. In recent months both offshore solar systems were brought together and are now operating as one large offshore solar farm system, 15 km off the coast of The Hague/Scheveningen, the Netherlands. The tow and installation of both systems has been supported by the Interreg North-West Europe funded project Ocean Demo.

About Oceans of Energy
Oceans of Energy is a Dutch company specializing in offshore solar energy, and the associated mooring technologies and environmental impact research. The company was founded in 2016 and since then has expanded to 30 employees. Oceans of Energy’s projects have been supported by RVO.nl, TKI Urban Energy, Interreg 2SEAS, Interreg North-West Europe, Horizon-2020, REACT EU, and the Province of Zuid-Holland. The company has raised EUR 15 million of funding and aims for a next investment round in 2022 for further scaling up.

About North Sea Farmers
North Sea Farmers is an international non-profit membership organization for the seaweed sector, consisting of approximately one hundred partners including Oceans of Energy. NSF works on joint investment projects and knowledge exchange on all aspects of sustainable seaweed cultivation. Its activities are focused on but not limited to the North Sea.

About Ocean DEMO
Ocean DEMO is a €13m project targeting the installation of ocean energy devices in EU waters. Its objective is to scale technologies up to multi-machine readiness by providing free access to Europe’s world-leading network of test centers and to drive innovation across the ocean energy supply chain. To boost market uptake and confirm the potential of ocean energy to investors, Ocean DEMO will run a competitive voucher scheme supporting technology development through a combined transnational offering across NWE test infrastructures. It is funded by the Interreg North West Europe program, part of the European Regional Development Fund (ERDF).