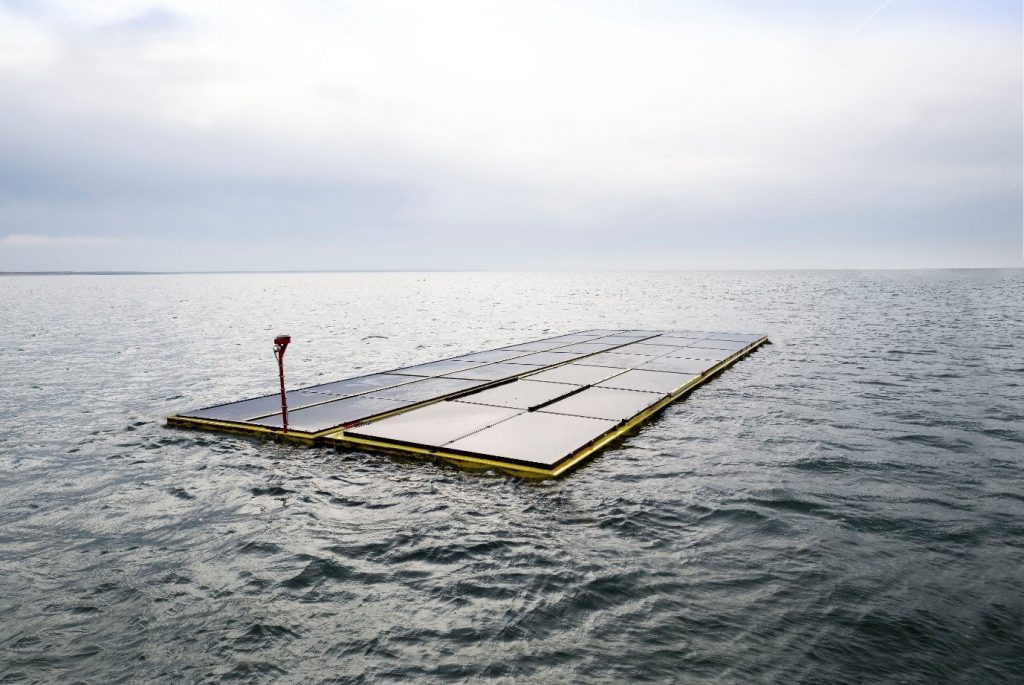 Oceans of Energy successfully installed the first modules of the world’s first offshore floating solar farm in the Dutch North Sea. Since November the system has already survived the first winter storms. The North Sea is notorious for its rough seas.

“I am very proud of this success, our team at Oceans of Energy and our partners. Together, we made it possible to install the first floating solar farm modules in the North Sea. The first offshore solar system for open seas in the world is now a fact, making us a pioneer in offshore solar energy generation. Clean energy generation without using land is needed, now and in the future,” says Allard van Hoeken, founder and CEO of Oceans of Energy.

Land is scarce – sea is abundant
Offshore solar energy at sea is a new and sustainable way to generate clean energy because it does not occupy land space. In densely populated coastal regions, such as the Netherlands, space on land is limited and greatly needed for housing, recreation, industry, roads, and agriculture. By moving solar energy installations to sea, spatial pressures on land are relieved. Moreover, offshore solar farms will in most cases not be visible from the shore.

Solar at sea in-between wind turbines: five-times the energy
Offshore solar offers great advantages when using the same sea area as offshore wind farms. When solar modules float in the sea space between the turbine foundations, 5 times more energy is generated at the same area of sea-space. Also, sun and wind together offer a more stable and continuous power supply when the winters have more wind than sunshine while the summers are more sunny. Further synergies arise through the collective use of components such as the grid connection to land, maintenance and installation works. Offshore solar is expected to reach the same cost level as offshore wind.

Environment
The technology interacts positively with the environment in several ways and the company, together with Universities and Research Organizations, is researching further implementations to improve ocean health. Offshore solar presents opportunities for the fishing industry, as the floating platforms act as protective habitat for juvenile fish. Also, the platforms can facilitate the growth of mussels and seaweed at sea. Oceans of Energy actively collaborates with the aquaculture industry for such research projects.

The systems that are currently deployed in the North Sea are subject to extensive monitoring. The effect of shading on primary production is negligible, as the tides refresh the water below the platforms continuously. With respect to organisms living on the sea floor, there is no effect on them, as sunlight never penetrates to the bottom of the muddy waters of the North Sea.

Worldwide application
Half of the world’s population lives in coastal areas, where offshore solar can solve the land constraints of renewable energy. Islands and remote locations which have limited space on land, but have a lot of sea space around, can become 100% renewable using the sea, instead of using the current diesel generators. Offshore solar can result in an enormous contribution to the climate targets for each type of application.

“The first step has been made, the floating platforms are floating in the North Sea and have already survived several heavy storms. Our next aim is to expand to 1 MW, the modular system is designed such that we can grow the installations towards 100 MegaWatts and more” says van Hoeken. “By having the first offshore solar system operational in one of the roughest seas in the world, we expect to create a large positive impact worldwide. Currently we are progressing towards the next phase, the upscaling phase. We are now raising the investments required.”

About the project ‘Zon op Zee (Solar-at-Sea)’
In 2017, six Dutch companies and Research Organizations including TNO, MARIN, ONE-Dyas and Oceans of Energy started with the development, construction, testing, and operation of the first offshore floating solar utility at open sea in the world. The first 8.5 kW of the modular system has now been installed in the North Sea, and this will be expanded in the coming months towards a 50 kW pilot that will be operational during a testing period of a year.

The project ‘Zon op Zee (Solar-at-Sea)’ has received an innovation contribution from the Dutch Enterprise Agency (Rijksdienst voor Ondernemend Nederland, RVO.nl) through the “Topsector Energie” policy of the Ministry of Economic Affairs and Climate.

Oceans of Energy
Oceans of Energy is a young Dutch company that specializes in offshore solar energy, the associated mooring technology and environmental research. The company was founded in 2016 and has since grown towards a team of 20 FTE. ‘Develop by doing’ is the philosophy. Learning and improvements are achieved not only by developing ideas from our strong offshore background and experience, but also through real life testing, building and going offshore. The company has raised to-date 3.5 MLN EUR in funding and will raise, in a forthcoming round of investment, capital for the upscaling of production and projects.